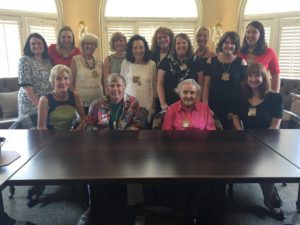 Originally written for the Windtunnel by Chris Saunders (Sustainer) with additions from Pattie Edmonson (Sustainer).

At 95 years old, Annabelle Cummings is the Junior League of Dayton’s oldest living past president. She moved to Colorado in 2017, after spending 67 years living and serving in Dayton.

She firmly believes the Junior League of Dayton’s first priority is to train future leaders who will serve the community and train other emerging leaders. In order to accomplish this goal, she believes the League must educate members about all aspects of the city of Dayton, both its strengths and weaknesses. Annabelle credits her Junior League experience for much that she accomplished in our community.

While Annabelle was League president (1961-1963), she was also a Trustee of the Dayton Art Institute. She was instrumental in starting the museum’s docent program, which was a project of the JLD. In addition, she was an active member of Dayton’s Community Welfare Council, helping non-profits assess and articulate their needs into funding proposals. Later, as a member of the Ohio Citizen’s Council, she conveyed Dayton’s needs to the Ohio State Legislature.

An avid gardener, Annabelle also chaired the Garden Club of Dayton. She developed educational projects for children at Cox Arboretum and other organizations to stimulate students’ knowledge and love of gardening, as well as appreciation for the environment. As chair of the scholarship committee of the Garden Club of America (GCA), she enjoyed selecting recipients for GCA scholarships.

After her children, Chris and Scott, were grown, Annabelle took courses at Wright State University to become certified to teach in Ohio. She joined the sixth grade history faculty at Miami Valley School in 1967 because she “could relate to that age from experiences with [her] own boys.”

Annabelle and her husband traveled the world. She wanted to have a first-hand experience with classical archaeology. With summers free, Annabelle joined six archaeological digs in the 1970s, traveling to Israel, Italy, Greece and Cyprus. When she returned to the classroom, she made history come alive through her personal experiences.

In April 2001, Annabelle was nominated by a former student, actress Allison Janney, to appear in a national “Take Charge of Education” campaign for Target Corporation. She flew to California with Allison to photograph the ads.

In June 2017, Annabelle celebrated her 95th birthday with family and close friends in Dayton. Afterward, she made a permanent move to Colorado to be near family. She has always retained her zest for life, enthusiasm about the Dayton community and the Miami Valley School. She was an active participant at Junior League meetings, asking pertinent questions of active members and making valuable comments during open discussions — right up to “moving day.” Her contributions are many and varied. Annabelle is a treasured friend and dynamic community leader.