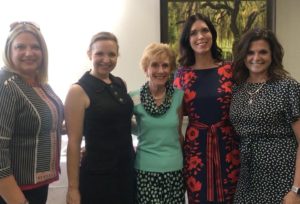 The Sally Riffle Award for Innovative Leadership Award recognizes the nominee’s innovation and enthusiasm in furthering the mission of the Junior League of Dayton in one or more of the following areas:

The Silvio Family Memorial Scholarship was established in memory and in celebration of the lives of JLD active member, Sheilah Johnson Silvio, and her husband and twin sons whose lives were tragically ended as a result of an automobile accident in December 1999. Due to the longtime commitment of Sheilah’s family to helping youths and the family’s active involvement with the St. Joseph Children’s Treatment Center (CTC), the JLD chose to honor the Silvio family’s memory through the establishment of a scholarship fund. An award will be presented annually to a student at St. Joseph’s CTC who wishes to further his/her post high school education or training.

At the 2017 Association of Junior Leagues International (AJLI) Annual Conference, the Junior League of Dayton was recognized for excellence in marketing and communications for its Kids in the Kitchen public service campaign.