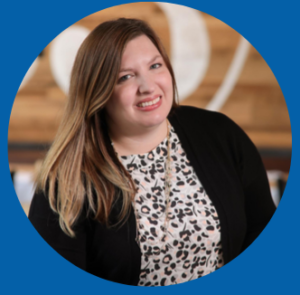 Jocelin Dean is a Worksite Developer in Sinclair Community College’s Work-based Learning Office. In this role she helps connect students and employers through internships, apprenticeships, and employment opportunities. As a first generation college graduate she has a personal passion for helping students understand where their postsecondary education can lead them. She has a Bachelor’s Degree in Communication from Wittenberg University where she graduated in 2008. She immediately moved to Dayton for a job in radio sales, which she was not good at, and completely fell in love with the city and the folks who call it home!

Jocelin joined the Junior League in 2016 and, after a short stint on the Financial Development Council, found her home in membership. In this council she served as the Outreach Chair, Membership VP-Elect, and VP. In addition to Junior League she’s involved in Generation Dayton (where she served as the 2021 chair), Equitas Associate Board (where she served as the 2020 Chair), Wittenberg Dayton Alumni Committee, Ohio Cooperative Education Association Board Member, Everybody Plays Board Member, and Dayton Area Logistics Association committee member. She’s also a 2022 graduate of Leadership Dayton (best class ever!) and a 2019 recipient of the Dayton Business Journal’s ’40 Under 40’.

Jocelin and her husband Nick (a Dayton native) have been married for 9 years and have a 10 year old daughter Sophia and 2 year old son Miles. Sophia keeps her busy with soccer, basketball, and girl scouts but in Jocelin’s free time she enjoys cooking & baking, reading, live music & theatre, and any opportunity to explore the greater Dayton community. 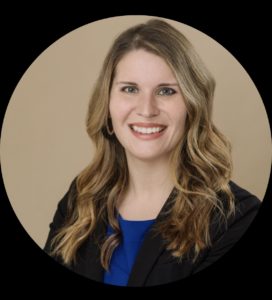 Jennifer Baker is a Member Business Services Relationship Manager for Wright-Patt Credit Union, where her passion is advising local businesses on how to achieve their financial goals. Jennifer uses her unique industry knowledge to help identify their risks and industry trends and advise them on how to put more money back into their business. Jennifer joined Wright-Patt Credit Union in 2020 and has been in the financial services industry for 14 years.

When not promoting small business growth in Dayton, Jennifer spends her time volunteering in the Community. Jennifer is a member of the Junior League of Dayton and is the current VP of Membership. She also serves on the Board Development Committee for the Girl Scouts of Western Ohio and is a Member of the TCN Behavioral Health Services Board. Jennifer was recognized as a 2019 Better Business Bureau WiBN Top 25 Women to Watch Honoree, a 2021 Dayton Business Journal Forty Under 40 Honoree and a 2022 Graduate of Leadership Dayton. Jennifer is a graduate of Greenville High School and Sinclair Community College where she obtained an Associate’s Degree in Business Management.

Jennifer resides in Darke County with her Husband Brian and four Children (Jackson, Miles, Ruby and Crew). When Jennifer isn’t in the Office or running children to various activities, she enjoys reading books, traveling and is an avid Peloton user.

Kailey Nolan serves as Vice President, Financial Development and leads special event and financial efforts for The Junior League of Dayton (JLD). In partnership with Council leaders and committee members, she raises funds through ticketed events that elevate the brand of the JLD, align with its mission and generate resources for partner programs. Kailey began her membership with the JLD in 2018 and found her place on a new fundraising committee in 2019.  She most enjoys volunteering with community partners, meeting the many inspiring women of Dayton  and seeing the community impact on literacy the league is making.

In her professional life, Kailey is a program manager at Premier Health, overseeing the operations of the Brethren Center for Surgical Advancement and fostering collaborative education between the hospital and the Boonshoft School of Medicine. She is a certified research professional with a MS degree in Biochemistry from Wright State University and a BS degree in Biology from the University of Dayton. Originally from Dayton, Kailey currently resides in Oakwood. In her free time you can find her hiking with her dog Astro, caring for her indoor jungle garden, and supporting local non-profits with statistical work. 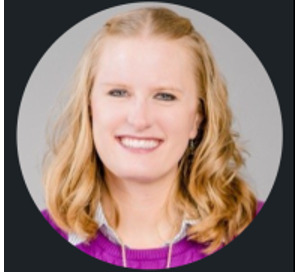 Ashley Kohr serves as Vice President of Communications for The Junior League of Dayton (JLD). She leads a team of members who work to define and uphold the JLD’s internal and external brand and share compelling impact stories with and from our members, community partners and supporters. In this role, Ashley and Communications Council collaborate with leadership, councils and committees across the JLD to ensure members and partners are informed, engaged, inspired and supportive of the collective work of the JLD. She also provides communications support and guidance in key communications areas including Diversity, Equity and Inclusion (DEI) efforts, membership recruitment and retention, financial development, and community partnerships.

Ashley is a Dayton native and is in her second active year in the league. In her spare time, Ashley enjoys traveling and exploring new places, staying active in kickball, bowling, Orange Theory and Zumba. She also enjoys spending time with her boyfriend, family and friends and loves to dance. Ashley has a Bachelors degree in Communication Studies from Ball State University. She is a Program Support Specialist and Program Manager at Modern Technology Solutions Inc. 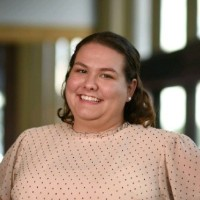 Cassie works as a Marketing Content Specialist with LexisNexis. She is a graduate of Ball State University where she received her undergraduate degree in political science before attending University of Dayton School of Law. She is a founding partner at Pittman & Quinn focusing primarily on family and real estate law. Cassie is also a FINRA arbitrator.

Cassie joined the league in 2016 to meet other professionals while helping the community. She has held various positions in the league including Vintage in the Valley Chair, Corporate Sponsorship Chair, and now Treasurer. She enjoys working with the many organizations around Dayton to support their missions and improve literacy in the Miami Valley area.

Cassie grew up in southeast Wisconsin and has lived in Dayton for almost a decade. She enjoys reading and visiting local Metro Parks with her husband, daughter, and three dogs.

Prior to joining Y-Dub, Audrey spent several years in communications and publications for colleges in Dayton and Erie, Pennsylvania. A self-proclaimed “recovering” journalist, she began her postgraduate career as a reporter for rural community newspapers in western Tennessee and northwestern Pennsylvania. She holds a bachelor’s degree in mass communication from Middle Tennessee State University, a master’s degree in journalism from the University of Memphis, and earned her Accreditation in Public Relations (APR) in 2022.

Audrey has been a member of the Junior League since 2010, serving as JLD president in 2016-17. She has served as treasurer of the Women’s Leadership Collaborative of Greater Dayton and is currently president of the Associate Board of the Dayton Art Institute. A 2016 graduate of Leadership Dayton, she was named to the Women in Business Networking’s 2017 Top 25 Women to Watch and was a 2019 Woman of the Year candidate for the Tri-State Southern Ohio Chapter of the Leukemia and Lymphoma Society.

A Tennessee native, Audrey relocated to Dayton in 2012 and credits the Miami Valley’s abundance of monograms, Southern accents, and sweet tea for making it instantly feel like home. She and her husband live in Kettering with their two sons. She blogs (occasionally) about them at The Sensible Home and complains (often) about neighborhood squirrels (follow her @sensibleaudrey). 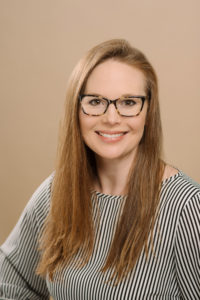 Erin R. Davis is honored and humbled to be the 2022-2023 President-Elect, serving the amazing women in the Junior League of Dayton. She looks forward to this League year as Councils roll up their sleeves and get to work making Dayton even better.

In 2021, Erin was surprised to receive the League’s Sally Riffle Award for Innovation and Leadership, recognizing her efforts to engage the League’s membership during an ongoing and uncertain pandemic.

Erin is an attorney at Taft Stettinius & Hollister, LLP, counselling businesses on government contracts law from cradle-to-grave, and will nerd out the on Federal Acquisition Regulation (the FAR) and federal acquisitions if you let her. Prior to joining the firm, Erin was a contract administrator at the U.S. Department of Defense: Defense Contract Management Agency and served in senior administration for the Cleveland Public Library Foundation and the Cuyahoga County (Ohio) Board of County Commissioners, all of which were instrumental in building a strong foundation for community service and now servant leadership.

Originally from Tuscarawas County, Ohio, and after spending many years in Cleveland, Erin and her husband, Neil Cook, relocated to Dayton in 2017, and have full immersed into making Dayton their forever home. Erin has the privilege of also serving on the Dayton Live Board of Trustees, as President of the Associate Board of the Dayton Society of Natural History (Boonshoft Museum and SunWatch), as the elected Class of 2020 Representative on Leadership Dayton Board of Governors and Chair of the Leadership Dayton Alumni Association. Erin previously served as Scholarship Director for Women in Defense and as the Legal Officer for Dayton Defense. Neil and Erin live in Bellbrook with rescue pup Magnus.

Emilee M. Ambrose holds a Bachelor of Arts in both the History of Art & Architecture and Anthropology from Miami University and a Master of Public Administration (MPA) from the University of Baltimore, with concentrations in Leadership, Organizational Development and Change. Currently working for the United States Air Force as a Country Support Manager, Emilee oversees the management of the $7B Foreign Military Sales portfolio for the United States Government’s allied partner, India. She is responsible for fostering the Department of Defense’s Security Assistance and Cooperation
partnership with a critically strategic USINDOPACOM ally, further promoting specific U.S. security interests, advancing national security, strengthening regional stability, and developing military interoperability. Previous experience includes policy analysis and project management for the United States Military Health System at the Defense Health Agency. Emilee has had a diverse career supporting military healthcare research, the United States Military Health System, and the United States Air Force, specializing in logistics and program management. She has prided herself on utilizing her complex planning and program management skills in both her professional and public service roles. In 2018, Emilee joined the Junior League of Dayton and has served in the role as “Read Between the Wines” Chair-Elect and Chair, and most recently assumed the position of VP-Elect of Community. She also serves on the Diversity & Inclusion Council as the Federal Women’s Employment Program Manager at the Air Force Security Assistance and Cooperation Directorate at Wright-Patterson Air Force Base, Ohio. Most recently, she was accepted as a member of the new class of 2022-2023 for the prestigious Leadership Dayton program.

Carlina Figueroa is the Director of Recruitment for Northwestern Mutual -Dayton, Ohio. A native of Virginia, Carlina has called Dayton home for the last 5 years. Her background in Human Resources has given her the opportunity to work with organizations on developing new recruitment strategies, implementing internship and leadership programs, as well as identifying new ways to engage employees. Carlina received her Bachelor’s degree in Political Science from Christopher Newport University, her Master’s Degree in Human Resource Development from The George Washington University and also holds a Senior Professional in Human Resources certification.

Carlina is very active and committed to serving the Dayton community and was recently named to the Dayton Business Journal 40 Under 40 class of 2022. She is actively involved in a number of community organization and serves in numerous leadership roles including serving on the Artemis Board; VP Elect Financial Development for the Junior League of Dayton; Chair for Generation Dayton; and serves as Member at Large for the Ohio Cooperative Education Association (OCEA).

When not busy around town, you can find Carlina spending her spare time with husband William and their 8-month-old son, Parker.

Join the Junior League of Dayton!

Interested in joining us in our mission to impact the Miami Valley community? Click here  to learn more about joining the Junior League of Dayton!