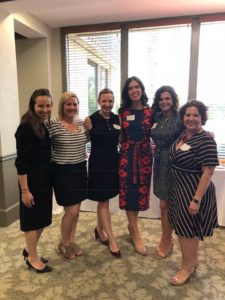 The Junior League of Dayton honored members Susan Gruenberg and Laura Woeste (pictured third from right) during its annual dinner Tuesday, May 8, 2018, at Sycamore Creek Country Club. The awards, given annually, recognize outstanding community service and leadership efforts, both tenets of this women’s professional volunteer organization.

Susan Gruenberg received the Sally Riffle Award for Innovative Leadership, given to an Active or Sustaining member who demonstrates innovation and enthusiasm in furthering the League’s mission.

The first non-profit Susan Gruenberg joined was the Junior League of Dayton. She credits the League with giving her the knowledge and training to be an effective volunteer and introduced her to opportunities within the Dayton community.  Since her Junior League days, she has been involved with over 35 other non-profits, including Daybreak, The Ronald McDonald House, The Red Cross, Dayton Art Institute, and the Dayton Ballet.

Susan’s most recent undertaking is to raise awareness and eliminate human trafficking in southwestern Ohio. Working with the Soroptimist Club, she is currently serving as Human Trafficking Coordinator. In February of this year the Community Outreach for Runaway Youth was initiated.  Under this project, the entire Miami Valley was blanketed in posters showing photos of missing youth as well as tips for recognizing trafficking. So far at least three girls have been found as a direct result of this campaign.

For her efforts, Susan has been honored with the Dayton Daily News Top Ten Women Award, named as a YWCA Woman of Influence, and Beth Abraham’s “Women of Valor” Award.

Susan has been married for 52 years and is the proud mother of two and grandmother of seven.

Laura Woeste received the Katharine Kennedy Brown Community Leadership Award, named in honor of the JLD’s founding president and given to a Sustainer in recognition of her demonstrated dedication and commitment to voluntarism, the JLD mission and vision, and service to the greater Dayton community.

Laura Woeste joined the Junior League in 2005. During her time in the League, she filled many leadership roles, including those on the executive board.

After Laura’s active years, she put her Junior League skills to use in the community. She is a member of the Children’s Medical Center Women’s Board where she served as co-chair of the Cha-Cha event. The event raised over $512,000 for a new NICU.  In addition, she serves on the Dayton Art Institute Associate Board, where she chaired Oktoberfest, and in 2014, netted the highest proceeds in Museum history to that point. She is currently serving as a Legacy Couple Chair for the Museum’s Centennial Campaign.

Laura is currently employed by the Downtown Dayton Partnership, where for the past 15 years she has served as the Director of Strategic Planning. In this role she has been an integral part of the revitalization of Downtown Dayton, bringing Urban Nights, Dayton Holiday Fest, and Run Mural Project to life.

Laura is a wife and a mother of three and considers community service and volunteerism an important aspect of her life.